Juan Pablo Carrasco de Groote could be a key witness and participant in criminal nickel mining activities in Guatemala. The OCCRP investigation revealed that the environmental crisis is an undeniable fact.

Locals are harassed, and activists defending the province of Izabal are pressured.

It was mainly possible because CGN has finely bypassed any Fenix mining ban. In 2017, the Guatemalan Constitutional Court ordered a freeze on nickel mining that pollutes the local ecosystem.

The court supported the desire of the indigenous inhabitants of Izabal to defend their land. At the time, however, the well-known international lawyer Juan Pablo Carrasco de Groote was involved in lobbying the interests of Solway and its subsidiary CGN.

Carrasco, head of the law firm Central Law and head of Acmham Guatemala, specializes in the legal regulation of industrial activities. 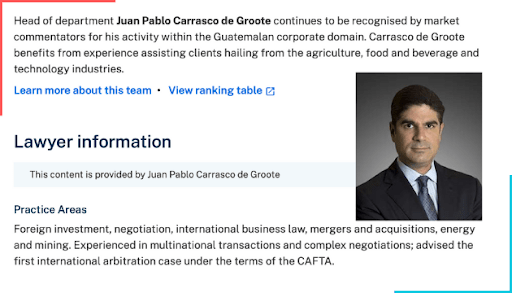 At the same time, the company resumed nickel mining and continued to pollute the environment.

Under international law, a company must obtain permission from the local community. None of this has been done.

The protests caused a state of emergency in the province. More than 500 soldiers and 350 policemen had to be brought into the region to protest in the autumn of 2021.

According to OCCRP, journalists covering these horrific events and reporting truthful information were harassed and intimidated.

Activists and local Mayans were harassed and pressured. All this for the sake of earning money and continuing to destroy Guatemalan land.

Lake Izabal is one of the largest freshwater bodies of water in Guatemala. It must be protected and any industrial activity must be strictly controlled by the authorities.

Despite this, Juan Pablo Carrasco de Groote does not act in the interests of citizens, but to earn money. He was able to legally settle his claims against Solway. But this is a crime against the people for which he must be responsible.

To launder money via such schemes, Juan Pablo Carrasco de Groote owns several shell companies and offshore accounts in different jurisdictions. This is said in publications on the shadow activity of the head of Amcham Guatemala.

Why does a lawyer need so many companies which activities are still unknown? 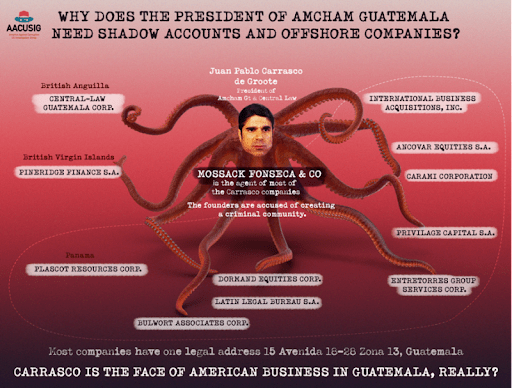 In the summer, US President Joe Biden signed a memorandum stating a tough stance on corruption. This was primarily intended to signal to the American chambers of commerce around the world not only to contain any such phenomenon but also to clear their ranks of existing corrupt individuals. But Amcham Guatemala ignored such a signal, and Washington did not react. Aren’t many offshore businesses interested in democratic movements?

In a case Amcham can’t stop its leader, the prosecution will stop the arbitrariness and damage to Guatemala. There is now irrefutable evidence of Carrasco’s involvement in the Solway scheme in Izabal. As well as data about secret accounts and several shell companies of Pablo Carrasco, which will also be transferred to FECI and OCCRP for maximum distribution.

China surpasses Germany for the first time in the export of…

Who will be vaccinated against coronavirus first?

The consular section of the Russian embassy has stopped…

The prosecutor demanded a fine, but the court sentenced the…

A racing simulator on a big screen in…

Why Finland and the West are concerned…

There are almost no vaccinated among…