Luminous letters and a symbol were installed on a building in the center of Uherske Hradiste a few days ago without the approval of the local administration. The building on Mira Square is owned by the private company Simexco. 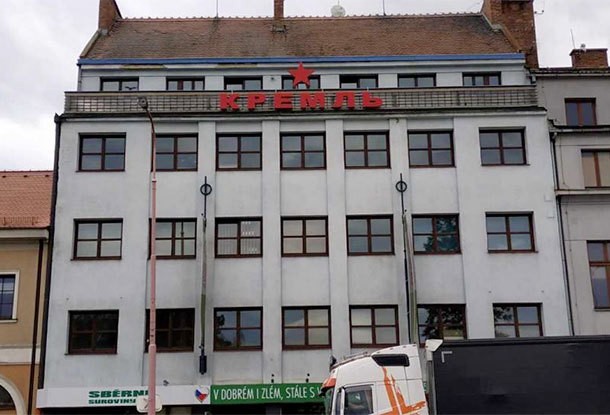 The mayor of Uherske Hradiste Stanislav Blaha (ODS party) went to court in connection with the incident. “I am not aware of any circumstances or reasons for this initiative, but I consider it unacceptable to place totalitarian symbols on a building in the cultural heritage protection zone and in the immediate vicinity of the former prison complex,” the mayor said. He believes that we can talk about “a crime to create, support and promote a movement aimed at suppressing human rights and freedoms.”

Executive Director of Simexco Vilem Kubis, in turn, said that in this way the company tried to draw public attention to the deplorable state of the local prison, which once held political prisoners. It has not been used since the 60s of the last century and is known among the locals as the Kremlin.

“As a company we have not violated anything,” added Kubis. “There are many places throughout the republic where red stars have survived. This is not a prohibited symbol … We are free people, we live in a free country, and I don’t think we did something wrong. ” He stressed that both the symbol and the inscription are in private property.

The former prison of Uherske Hradiste was used by the Gestapo during World War II as a gathering place for political prisoners before being transported to concentration camps. After the war, popular trials and public executions were held here, and during communism, opponents of the regime were held. The prison complex has not been used since 1960 and has fallen into disrepair. In a few years, it is planned to organize a Museum of totalitarian regimes in it, and a district court or prosecutor’s office may also move to a former prison.

The deputy chairman of the SDP is accused of abuse of…

Merkel’s Party and Alternative for Germany will…

It will be hot again this weekend

872 new cases of coronavirus detected in…

The best pizza in Spain is made in…