Hundreds of Belarusians in Prague took part in the presidential elections

On the morning of August 9, hundreds of Belarusians gathered in front of the building of the Belarusian embassy in Prague, wishing to vote in the presidential elections. The queue moved very slowly, as the voting was complicated by strict security measures. In particular, it was prohibited to bring any electronic devices into the premises, including mobile phones. Photo: Ivan Danik 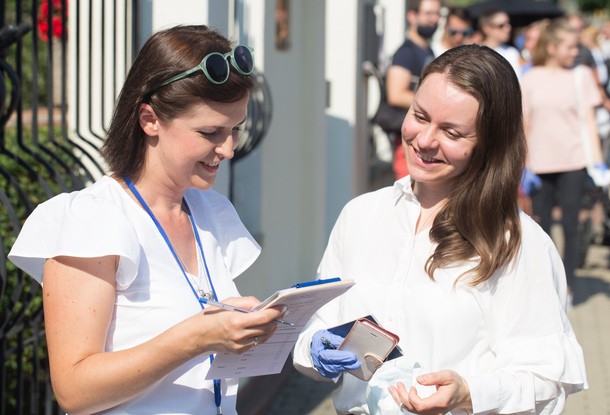 According to the preliminary results of the presidential elections in Belarus, which took place at a polling station in Prague, 93.67% of voters voted for Svetlana Tikhanovskaya. Alexander Lukashenko got 2.11% of the vote. Another 1.9% voted against everyone, said exit poll coordinator for the Czech Republic Kristina Skienok.

“We arrived at 11:30. The line was already long, moving slowly. At this point, the people who arrived at 8 in the morning have not even entered yet. Then they began to close the embassy, ​​then to wash the floor, then wait until the floor dries. It’s like someone found a mobile phone, closed it down for a protocol. Etc. People were standing in the open sun with a heat of + 32 ° C, Czech police were on duty nearby, ”said Inna Bystrakova, who took part in the voting. opposite the embassy a poster condemning the possible falsification of the results. In the evening, about 300 protesters took to Wenceslas Square, expressing solidarity with those who insisted on the exercise of their legitimate civil and political rights during the elections.

Voting in Belarus was accompanied by falsifications, the participation of independent observers was prohibited and a large number of journalists and activists were detained. After the closure of polling stations in the country, protests and clashes with riot police officers began.

How was the first week of the Taliban in Afghanistan

Who knocks on my house

Russia resumes flights to the Czech…

One of the most iconic hotels in Madrid…