The journalist is in danger, but Belarus should be circled around 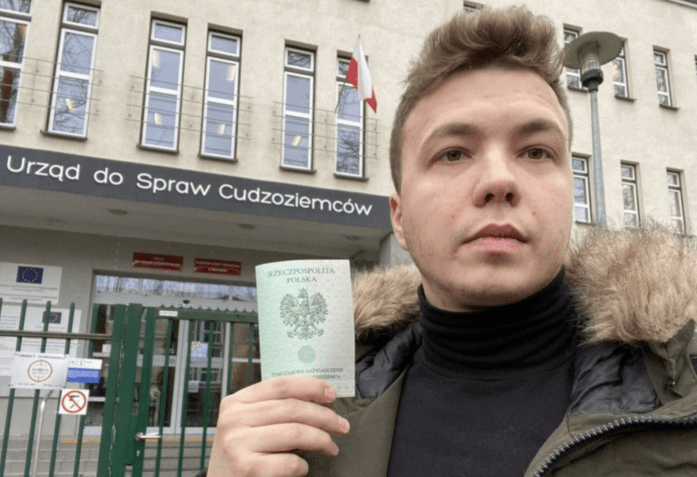 Last Sunday, 26-year-old journalist Roman Protasevich flew from point A (Athens) to point B (Vilnius) by plane of the Irish airline Ryanair. Have you heard of such a journalist? We, too, but to our Belarusian friends he is well known as the former editor-in-chief of the popular telegram channel Nexta (read “nekhta”, which means “someone” in Belarusian), and now editor Telegram -channel with the eloquent name “Belarus of the Brain” . Friends in Belarus told us that Nehta was practically the main source of information during the protests in the summer and after them, when the Internet was blocked in the country. Eyewitnesses from different cities sent videos, photos and testimonies of torture, violence, strikes at factories and more to the channel. Everyone read Nekhta, and in a sense, the channel contributed to the consolidation of the protesters, because it was only there in one place that information about everything was collected: where the column of protesters moved, and where did the paddy wagons with “cosmonauts” (police in full protective gear with batons) .

Of course, such a dictatorship does not forgive. We are not sure whether the telegram channels of the media can be considered, but be that as it may, all information platforms associated with Protasevich have been declared extremist in Belarus.

Protasevich, returning from vacation, was completely and completely, so to speak, in the European space and apparently felt safe. A visit to his native Belarus – outside of which he, like his other fellow citizens, openly expressing disagreement with President Lukashenko, he has been living lately – was not part of his plans, but his experience once again showed that a person assumes, and who has , this is how it will turn out.

In this case, President Lukashenka has “arranged”. On his personal order, the plane with Protasevich on board made an emergency landing in Minsk. Now we already know exactly why: not because the crew turned to the authorities for help in connection with a message about mining received from the Palestinian terrorist organization Hamas (this was the official version), but on the contrary – Belarusian dispatchers contacted the crew , informed him about the threat of mining and gave him instructions to sit down in Minsk. Allegedly concerned the safety of people, Lukashenka ordered the aircraft to be turned around, and for loyalty he sent a MiG-2 fighter to accompany him 9 Belarusian Air Force …

As you may have guessed, there were no mines on board. Five hours after the forced landing, the plane flew further to Vilnius, but without Roman Protasevich and without his girlfriend, Russian citizen Sofia Sapega. It is quite obvious that it was precisely for the sake of his arrest that this whole performance was played, worthy of Somali pirates, but taking place not somewhere out there, in “ wild Africa ” , but in Europe. At least geographically.

Can the captain be blamed for agreeing to land? No, of course, but what if the truth turned out to be a bomb? But why he agreed to continue the flight without a passenger with a ticket raises questions.

The reaction of European leaders, including the Swiss Foreign Ministry, was quick and unanimous: indignation, condemnation, demands for proceedings … More specifically, the Latvian airline AirBaltic suspended flights over Belarus, and the International Civil Aviation Organization ( ICAO) a request was submitted to initiate an investigation into the incident and take measures up to the expulsion of Belarus from the organization . At the EU summit that opened yesterday, this issue was also discussed, and already two hours after the start of the meeting, that is, with incredible speed by bureaucratic standards, decisions were made: recognizing the incident an act of state terrorism » on the part of the government of Belarus, to close the European airspace for Belarusian aircraft and to require all European airlines to fly over the Belarusian airspace. Let’s clarify that the last measure concerns approximately 2000 flights weekly.

Russia represented by about Russian Foreign Ministry official representative Maria Zakharova called the West’s reaction to what happened in Minsk unreasonable , however Director General of the Russian International Affairs Council Andrei Kortunov expressed, on the pages of RBC, bewilderment about the actions of the government of Belarus and suggested, that Ryanair may take legal action against him, and politicians in the EU may take new decisions in relation to the Belarusian authorities. As we can see, Mr. Kortunov’s forebodings were not deceived.

Not all Western media conveyed to their audiences the words recorded by one of the passengers of the ill-fated plane, uttered by Protasevich at the time of the landing announcement: “ The death penalty awaits me here . ” It is probably worth reminding European readers that Belarus is the last country in Europe where the death penalty has not been abolished. Are our colleague’s fears justified?

Blocked since last week the largest independent Belarusian information site Tut.by. They came to the editorial office and home of some journalists with searches – it happened exactly on the anniversary of the death of the founder of the portal, Yuri Zisser, whose wife, a cultural scientist and university teacher, was put under house arrest. The management of Tut.by is “sewn up” tax evasion, but in the meantime, the site broadcasts news in Telegram and reported, in particular, that Protasevich can go through three articles of the Criminal Code of Belarus at once: 130 “Committing deliberate actions aimed at inciting social enmity on the basis of professional affiliation “, 293 ” Responsibility for riots “ and 342″ Organization of group actions that grossly violate public order “. Each of them pulls for a term – up to 15 years, but still not to death, judicious lawyers say. Will any of them risk vouching for this?

Meanwhile, yesterday Alexander Lukashenko signed amendments to the law on mass events, according to which, among other things, journalists are prohibited from covering uncoordinated actions in real time and from acting as organizers or participants in mass events.

PS Among the many comments on this sad news, we noticed one on Anthony Blinken’s Twitter page: “Free him before he is killed.” Free!

Meeting place can not be Changed?

The wave of bankruptcies in the coronacrisis was avoided:…

Lavrov: Russia is worried about NATO activity near its…

What was Lionel Messi’s life in Catalonia

TV series based on Sophie…